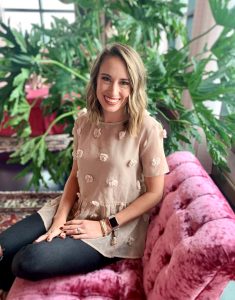 A guest blog by Callie Buekinga. Callie lives in Franklin, TN with her husband Gabe and two young children. She is currently earning her Master of Arts in Theological Studies at Williamson College and is a joy to her fellow students and faculty. You can hear more from Callie directly through her blog at www.calliebb.com.

“This past week I viewed a film on YouTube that a cohort shared called ‘The Star of Bethlehem’. There are moments in our lives as Christians where we make a discovery or find new information that leaves us in complete awe of the magnitude and glory of God. This film was one of those moments as I watched the end with tears streaming down my face. The premise of the movie showed Frederick ‘Rick’ Lawson on his pursuit of discovering what the star of Bethlehem during Jesus’ birth actually looked like and if there was scientific evidence to show its existence. Thankfully, through scientific advances there is software that can recreate the night sky of any time in history because apparently the movement of the stars and planets are not random. I have almost no astronomical knowledge, but I learned that the stars and planets move in very predictable and precise patterns, which allows for us to look back in history and see exactly where they were in the night sky! I won’t give away all of the details, but I highly encourage you to go check out the 1-hour film and see exactly what was happening in the sky on the night that Jesus was conceived, born, and at his crucifixion.

What left me in tears is the fact that our powerful creator had to set these things in motion to happen at these exact times at day 4 of creation when time began, and he put the planets in motion. Back in January, I began classes to get my Masters of Arts in Theological Studies at Williamson College. Let me begin by saying that I had almost no theological knowledge and my first few classes I was busy writing down lists of large, foreign words that my cohorts were using which I had no clue what they meant. I felt very out of my element and wondered what in the world a stay-at-home mom with a background in banking and real estate was doing here. While I had done several Bible studies since becoming a Christian, I had never picked up a theology book and felt I had a lot of catching up to do. Thankfully a saying I’ve heard around church was proven true, that if God calls you to something, He will equip you for it. My first class was called Biblical Theology and while I learned many things in this class, one of my biggest takeaways was really understanding the overall metanarrative of the Bible. (Confession: I had no clue what metanarrative meant and now I can use it in a sentence!) Basically, what that means is that the overarching story of the Bible is pointing towards Jesus Christ, the Messiah. We see foreshadowing and even appearances of Jesus in the Old Testament and each of these stories are pointing us to the good news of what is coming. The film reminded me of this. Not only scripture, but in fact creation itself is pointing us towards our savior. God set the stars in motion at the beginning of time, before he had even created humans and had predetermined that even the stars and planets would declare Jesus’ arrival and his glory! Knowing this takes my breathe away- he is truly sovereign over all.

I love that there is scientific evidence to back the events of the Bible. In church growing up, I was not taught this. When I was younger, I was skeptical of the Bible, not really knowing if it was true or if it could be trusted. It seemed to me you were asked to believe this old book without any actual evidence or proof that it was real. One of the coolest discoveries I have made in school is that there is actual historical data to support the Bible’s claims. In one of my Systematic Theology classes we read Gary R. Habermas’ book, The Case for the Resurrection of Jesus. As the title may give away, this book focuses on the historical evidence that prove Jesus died, was buried, and resurrected. Habermas uses a minimal facts approach and really digs into all of the claims the Bible makes, that Jesus was crucified by Roman soldiers, he was buried, there was an empty tomb, and the resurrected (and healed) Jesus was seen by the disciples, Paul, and more than 500 witnesses. The book goes into all of the theories to disprove these events such as hallucinations, hiding the body, Jesus really didn’t die etc. and runs through the evidence to prove why these theories are not valid. One of my favorite points attacks the theory that if it was a group conspiracy to lie and say that Jesus’ tomb was empty, they would have never said that women were the ones to discover it. At the time of the first century, women were at the bottom of the totem pole and were not considered credible witnesses and weren’t allowed to give testimony. If you were going to make up a believable story, you would never have let women discover the empty tomb. As a woman, I am a big fan that the Lord is seen throughout scripture restoring honor and dignity to women.

Reading this data gave me an unshakable confidence in my faith. My faith is not based solely on a personal experience I have had with the Lord but now it is strengthened by historical and scientific data. Maybe you are in a place of not knowing if the Bible or Christianity is real. Maybe you’re walking through a season of doubt or actually didn’t feel you had permission to ask questions and search. I want to tell you to search the evidence yourself. There are some wonderful resources out there from people who have spent years combing through the data and compiling sources. Don’t stay in the place of doubt and questioning but begin to look for yourself. Because I believe that if Christianity is true, it won’t fall apart if we look behind the curtain. Our faith is reasonable and looking at the evidence will only strengthen, not harm your faith.”

At Williamson College, we’re passionate about the kind of learning that inspires the student to think of their personal contribution beyond the classroom. We value a community where questions are valued and service is esteemed. We’re about building higher learning—around real life—and giving you the wingspan you need to succeed.